Summary: The follow up to 2005's Batman Begins, once again, directed by Christopher Nolan and starring Christian Bale as the Caped Crusader aka Bruce Wayne. 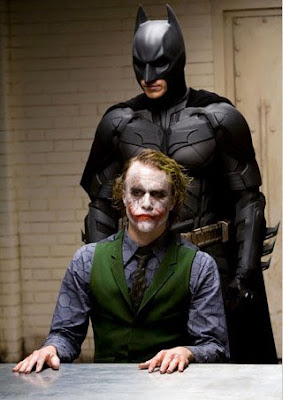 Summary: The follow up to 2005's Batman Begins , once again, directed by Christopher Nolan and starring Christian Bale as the Caped Crusader aka Bruce Wayne. All hell continues to break lose in Gotham City, but this time due to the legendary cackling psycho path, The Joker, who is turning the good guys bad and the bad guys even worse.

Review: Nothing new in the Batman plot, Gotham City is enduring the worst crime in decades, kind of like America's current gas prices, and Batman comes to save the day. Big explosions, gruesome fight scenes and classic comic book one liners like The Joker saying, “Put a smile on your face!”

In 2008, Batman has an extreme makeover—extra muscles, six pack abs, a Prada like superhero suit, and bone structure that Michael Keaton (1989 Batman ) never had.

Even with this beauty king version of Batman , Christian Bale manages to find the eerie balance of mystery and confidence, which other Batmans like Val Kilmer and George Clooney just seemed to be imitating.

The character of Rachel Dawes returns, played by a drab Maggie Gyllenhaal . Out of all the women in the Batman franchise, Kim Basinger , Michelle Pfeiffer , and Alicia Silverstone, Gyllenhaal was a disappointment. In every scene it looked as if something else was on her mind like, "Who do I have to marry to get paid as much as Katie Holmes ?"

Back in January 2007 the Defamer reported , Holmes would not return to The Dark Knight due to "scheduling conflicts" and she was “leaning toward accepting a role in 'Mad Money'." Mrs. Cruise turned down The Dark Knight for Mad Money ? I feel a Joker laugh coming on.... "BWAHAHAHA!"

Now that we got the co-stars out of the way—let’s talk about the real star… make no mistake, Heath Ledger is Diana Ross and these other kids are the replaceable Supremes . Yes, believe the hype, Mr. Ledger as The Joker is categorically brilliant. It's rare that hype is ever true in Hollywood, but in this case the Brokeback Mountain star turned another regurgitated Batman movie into a riveting film that will be Oscar worthy only because of his performance.

Everyone and everything is secondary to Ledger. The Joker terrorizes Gotham, they actually label him with the hot button word "terrorist", with a carved-in smile, greasy-green hair and a legion of schizophrenics as his accomplices. He topped Jack Nicholson ’s portrayal of The Joker in 1989, which many critics deemed impossible. The late-great Ledger wrapped The Joker right around his soul making a strong cast of characters into perfection.

When The Joker isn't on the screen, the story becomes flat. For example, one of the good guys is morphed into a villain and suddenly we are introduced to a new comic book character, which felt unnecessary and a bit implausible. Whatever the case, just when you are almost bored, The Joker pops back up, like he knew you were waiting for him.

Visually, The Dark Knight is eye-popping; the film is made for an IMAX screen with portions filmed on IMAX cameras. Each scene mesmerizes the viewer right into Gotham City with not one frame disappointing. The flawless special effects are classic and will still look modern twenty years from now.

The Dark Knight also manages to have a stream of diverse characters from every race and ethnicity. I'm not sure if this multi-culturalism was intentional by the creators, but Gotham City was as diverse as New York City from the thugs to the politicians.

Without a doubt, The Dark Knight is the best summer film to date, even though the film clocks in at an epic two hours and thirty minutes. Surprisingly, Ledger, in one of his last roles since his death in early 2008, didn't sadden the film. The Oscar nominee was so powerful as The Joker that you completely forgot this was a man who ended so tragically—now that is what you call a gifted actor.

The Dark Knight is in theaters today.