Summary: A cast of diva actors, set out to make the epic war film. 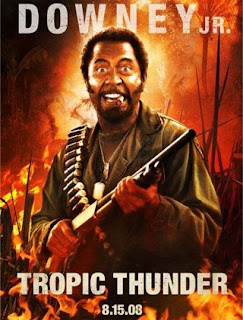 Summary : A cast of diva actors, set out to make the epic war film. After on-set drama, the cast is dropped in an actual war zone to truly feel their characters.

Review : Good news, Robert Downey, Jr. playing a black guy, is not offensive. Before anyone shouts black face, I would recommend seeing the film.

Tropic Thunder is a movie-within-a-movie and Downey plays a five-time Australian Oscar winner, Kirk Lazarus. After a pigmentation alteration procedure, Kirk ambitiously takes on the role of the black character, Sgt. Osiris. Even with a few inappropriate racial jokes that made me squirm at times, the creators of Tropic Thunder managed to handle the white guy going black with wit and humor—Lazarus going black was essential to the plot.

Starring and directed by Ben Stiller , Tropic Thunder takes a needed stab at the powers that be in Hollywood who believe fluff equals box office success. The hilarity starts right from the beginning with fake previews, which I could've watched for a full two hours, and the stock actors like the fledging action star turned serious actor, Tugg Speedman, played by Ben Stiller. Also, the rapper turned actor, Alpa Chino, played by newcomer Brandon T. Jackson and Jack Black as Jeff Portnoy, the drug-induced comedian. Every moment in Tropic Thunder you say, "I've seen that before" and you're glad someone is mocking it. For example, Jackson's character endorses a power drink called "Booty Sweat" and the snack "Bust A Nut Bars".

Robert Downey Jr. is the true star of the film, landing each joke and convincingly plays a white guy who can convincingly play black. However, at times Downey’s Negro voice and blackedy-black jokes were grating, especially during an argument over the N-word. Nonetheless, Downey's delivery is pure, funny, and void of racism.

We also get excellent cameos from Toby McGuire , Jennifer Love Hewitt , Tyra Banks , and a great appearance from Lance Bass , which made the audience bust out in laughter. There is also a secondary starring cast, which includes Nick Nolte as the man who wrote the book the movie is based on. The always high-octane Matthew McConaughey is the greedy Hollywood agent. Then there is a small but memorable role from Tom Cruise -- who I didn't even recognize until I saw the credits roll. It was a relief to see Will Smith 's best friend make an audience laugh... he hasn't had a sense of humor since the nineties!

Sure, there are some moments when the plot falls right down a gun barrel, the comedy is too over the top and the jokes are downright gross. Still, in comparison to the other slapstick comedies that are spit out yearly, like all those Will Ferrell movies, this movie-within-a-movie strikes above the rest.

Tropic Thunder is in theatres today.