Summary: Angry black man is bitter about the interracial love fest that just moved next door to him. 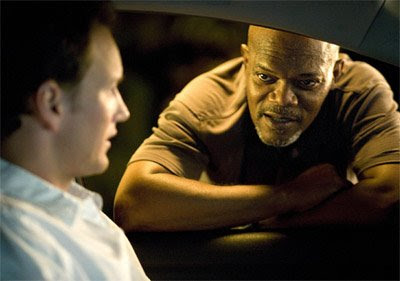 Review : Samuel L. Jackson is the hardest working man in Hollywood. He is always enjoyable on screen, whether it's bad movies like Snakes on a Plane or legendary films like Time to Kill —the man performs no matter what the role. So it makes sense that Jackson is the only person who could make the role of Abel Turner in Lakeview Terrace , which is theatres today, enjoyable. Mr. Turner is twitching in repressed black rage every time he sees Lisa Mattson, played by Kerry Washington, get some love by her big ole strapping, blonde and blue white husband. Lawd knows, this is the type of image of a black man Barack Obama is trying to take out of the mind of voters.

Lakeview Terrace isn't terribly bad, but it's far from a chilling thriller. The scenarios are humdrum and don’t conjure the likes of true "someone is invading our home” thrillers. For example, Abel is "terrorizing" his neighbors with bright security lights—and, God forbid, the interracial couple can't sleep! This is a far cry from the The Hand That Rocks the Cradle when the mother found out the evil nanny was breastfeeding her child.

Another example, Abel has a bachelor party and manages to catch Lisa's husband on camera being forced to dance with a stripper—he puts the DVD of the stripper and her husband in Lisa's mailbox. Again, leaps and bounds away from the shock we all had when Jennifer Jason Leigh slowly walked down the staircase of the salon in the same haircut, make-up, and outfit as Bridget Fonda in Single White Female . All of the oohs and ahhs were lackluster and weren't even worthy of a "no he didn't!"

This is a “racial” thriller and the handling of our country's greatest sin is often times uncomfortable. The racist jabs are oddly placed and solely directed toward Washington's white husband. Lisa's father is racist to him, the neighbor is racist, and he mentions several times how he gets so much "shit" from black men for having a black wife. In the mind of the writers, David Loughery and Howard Korder , who happen to be white, it's as if white people just gave up on racism and transferred it to black folks.

Furthermore, while I don't know every black man on the planet, I have never met a black man who truly cared that another black woman was with a white man. Reason being, there isn't a shortage of black women for black men. Now, a black woman mad at a brotha for marrying Mrs. Whitey—that might've been a hot movie! An angry, single black woman who had just about enough of seeing her menz being taken by Mrs. Blue Eyes (hell, add a black gay couple in the neighborhood to make her even angrier)—she goes in a Fatal Attraction rage to take back her brothas! "I won't be ignored, Daquan!" Well, that would still be socially problematic. Still, I see Sherri Shepard in the starring role!

Whatever the case, Lakeview Terrace was such a weak film that it's hard to get offended. Fortunately, there are strong performances from every actor. Even though the movie is littered with uninspiring twists; the plot is one solid storyline and told smoothly. Lastly, Samuel L. Jackson's delivery as racist, angry blackey is fun to watch for 86 minutes.

Lakeview Terrace is in theaters today.